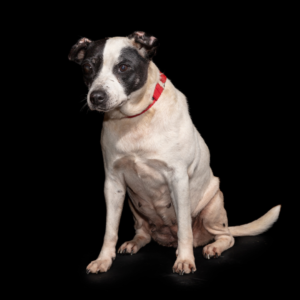 Bandit (formerly Clare) the 7-year-old terrier arrived at the Home back in March quite nervous and in a dire situation. She had severe dental disease, was covered in fleas, had infected flea-bitten skin and her right eye was completely enlarged and required urgent surgery. It was clear that she was in a great deal of discomfort and in a lot of pain. The animal care team at the Home knew they had to take immediate action to relieve Bandit’s pain. It was a blessing in disguise that Bandit arrived when she did, as her eye and other health issues could have worsened.

The animal care team performed surgery on Bandit to address her dental disease and to surgically remove her right eye, to ensure she could live a pain-free and comfortable life as soon as possible. After the successful procedure and many health checks, Bandit recovered well with a lot of rest in foster care.

Bandit has recently been adopted and has settled in at her new home. She has since been on many exciting adventures and living her best life, now that she is pain free. It’s now Bandit’s time to enjoy the rest of her latter years with her new family.

Bandit’s new family have gone above and beyond to ensure she receives the life she deserves. She has a safe space in the living room with a comfortable bed and her family have been working with her to ensure she settles in well to her new home. In every update received, Bandit has made big improvements and is loving her new life!

It’s not unusual for dogs just like Bandit who may require urgent surgery and a little extra care to come through our doors and Bandit has proven that with the right care, treatment and love, she can live a normal life just like any other dog! 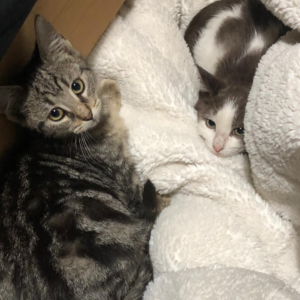 There has been a number of kittens who recently arrived at the Home with ringworm, including Tarvos and Narvi, both named after little moons around Saturn.

Tarvos and Narvi first arrived at the home in need of help. After the Animal Care Team conducted health checks, it was discovered that these two fluffballs had ringworm. Despite its name, ringworm (also known as dermatophytosis) is not an actual worm, but a fungal infection that can affect the cat’s skin, hair and nails. It is called “ringworm” due to the circular rash that is usually red, itchy and can be shaped like a ring.

It is one of the most common causes of skin infection in older cats, and kittens are usually the worst affected by it. Fortunately, this fungal infection is easily treatable and kittens can make a full recovery with the right medication and care.

Ringworm is a zoonotic disease, meaning it can spread between humans and animals, but fear not, as it can easily be contained to ensure that humans and the other animals that share a home, stay fungus-free. Pets typically recover from ringworm on their own in about three months, but it’s always best to consult with a vet about the right treatment options based on the severity of the condition.

These lovely kittens arrived a little timid, but after some time spent in foster care, this little duo have been building their confidence and have shown their playful and energetic side! Narvi is the most confident of the two and absolutely LOVES food, whereas Tarvos is a bit more on the shy side, but loves to play and is known for doing the cutest little zoomies! They are your typical kittens who love to play and better yet, have quickly learnt to use their litter trays!

Update: Both kittens have found a loving forever home together! 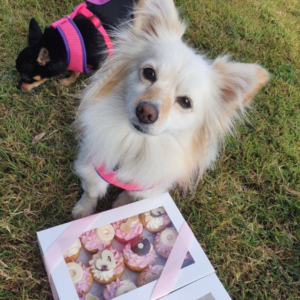 We received an awesome update about Lily (formerly Bindi) the Pomeranian who recently celebrated her 3rd ‘Gotcha Day’ with mum Despina. Lily spent the day with The Mighty Chi’s, a local group of Chihuahua dog pals who celebrated Lily’s special day with pupcakes and dog-friendly biscuits. Despite not having any Chihuahua in her, Lily was accepted into the group, became a regular at meetups and was whole-heartily welcomed as an honourary Chi!

Despina shared that she originally came to Sydney Dogs & Cats Home to adopt another dog. After chatting with the staff about her desire to have a dog who would have adventures throughout Sydney and join Despina at work doing dance therapy in aged care, it was ultimately decided it wasn’t the best fit. Along came Lily, who at the time wasn’t yet available for adoption but Despina was given the chance to take her for a walk and she fell in love. “I put in my application that day so that I could pounce the nanosecond Lily was up for adoption.” It wasn’t long until Lily became available, and Despina calls herself the luckiest person in the world to become Lily’s mum.

Lily spent her first two weeks in her new home becoming her mum’s little shadow, following her around each room and not letting her out of sight. Lily eventually settled in and began her new adventure-filled life. Lily enjoys spending her time rumbling with her best friend, Tiffany the Chihuahua, chasing other dogs at the dog park, and going to work with her mum. But one of her biggest achievements has been assisting an 85-year-old woman at her mum’s work to get over her life-long fear of dogs after a bad experience as a little girl. 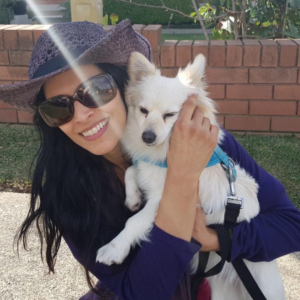 While Despina was originally disappointed that it wasn’t the right fit with the first dog, she was happy and confident when Sydney Dogs & Cats Home staff said Lily was a great fit. Despina’s advice to other animal lovers looking at adopting is “chat to staff honestly about your lifestyle and the life your dog would lead so they can match you with the perfect dog.”

Rescue dogs like Lily can make a large impact on many people’s lives and in turn, rescue animals receive the second chance they deserve. All the staff and volunteers at Sydney Dogs & Cats Home wish Lily a Happy Third ‘Gotcha Day’!

If you are thinking of welcoming a furry friend into your home and giving them the second chance they deserve, click here to see all our pets waiting for their forever homes. 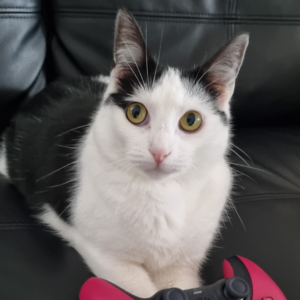 Elysia had heard about Sydney Dogs & Cats Home 6 years ago from her mum who knew she had been wanting to adopt a rescue animal. When Elysia and her partner moved out, they started looking for a 3rd member of the family and had seen Topdeck on the SDCH website. However, at that time weren’t quite ready for a pet. Fast forward 3 months and they were finally ready and by chance, Topdeck was still available, and it was meant to be! Elysia says “Topdeck is a serious joy to have around. From his cute beeps meow to his crab walk ritual in the morning he is the best and we love him so much.” Elysia and her partner adopted another cat, Cinnamon who Topdeck has a bit of sibling rivalry!

Topdeck very much made himself at home from the get-go and has become a huge part of their family. He even claimed a beanbag as his throne and is now one of his favourite spots to chillax! Elysia says “The impact Topdeck has had since coming into our lives is huge. He’s always there for us if we feel down or lonely. He is always there for a cuddle and a purr.’”

Apart from claiming his throne and being a snuggle bug, Topdeck loves any event involving food and lets Elysia and her partner know with his beeps that he is ready to eat! When he’s not eating, he loves anything that has a string attached and batting at their feet while in bed! Most of all, he loves being cuddled next to the window as he watches the trains go past.

Elysia’s advice for anyone looking to adopt is “Adopting a pet will change your life and you have to be prepared! You’re not just taking on another mouth to feed, you’re becoming their whole life and the supporter for theirs!”

If you are thinking about adopting a pet, check out all our pets available for adoption on our Adopt page here.