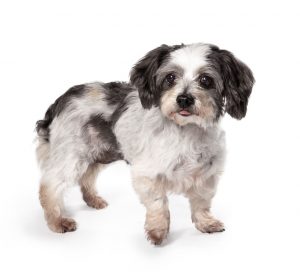 la, a 13-year-old Maltese-cross, came into our care as a stray.  As is the case with many of the senior pets entering the Home, Carla was not in the best condition.

With a mouth full of rotten teeth, a mammary tumour, and an inguinal hernia, what concerned our animal care team most was that Carla was struggling to urinate.

She would urinated often, but always small amounts often tinged with blood.  Carla was quickly put on antibiotics and given pain relief, then taken to an offsite vet clinic to have her bladder drained and x-rays taken. 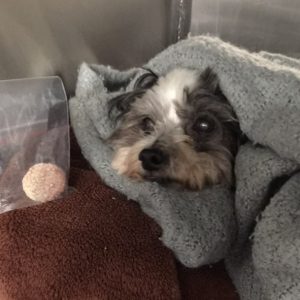 Our dear sweet Carla was then diagnosed with having an enormous bladder stone, a painful condition that was the result of the urine in her bladder crystallising over time.  She was then swept into surgery to have the bladder stone removed, her hernia repaired and the mammary tumour removed.

Carla then recovered in foster care where she transformed. She was much happier and was able to settle quickly as it was clear she was no longer in pain and was able to urinate normally.

Thanks to a clean bill of health, her second surgery was arranged to address Carla’s dental issues and the removal of a few problem teeth.

Being such a sweet girl, it comes as not surprise that Carla found her forever home with her foster carer. 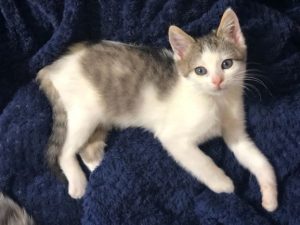 When Julietta, a tiny eight-week-old kitten came into the shelter, it was clear something was wrong, this little girl was refusing to put weight on her hind leg.

From her physical exam done by our Vet team, it was revealed that she had a fractured leg. Immediately, x-rays were taken to confirm the severity of her injury. Poor little Julietta had a break in her femur, which was of great concern as the break went through the growth plate of the bone.

To repair the injury, Julietta would need to undergo a very delicate procedure to pin the bone together. It would be important for the bone to mend correctly so that if did not interfer with her growth plate. After many hours, her delicate surgery was deemed a success!

Julietta was then placed into foster care, with a staff member to recover. At her 4 week check-up, further x-rays were taken which revealed that Julietta’s bone had mended well and she would be strong enough to undergo the surgery to remove the pins that were holding her leg together.

Still being quite young, it was important that we removed the pins, so that they did not interfere with her growth into a healthy cat.

Despite Julietta’s rough start in life, once she had fully recovered, she only spent two days back in the shelter, before this playful, friendly kitty found her forever home. 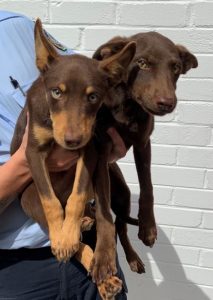 Beau and Tye, two 16-week-old Kelpie puppies, arrived at the Home in the arms of the council ranger.

These siblings were found running the local streets of Bonnyrigg. Underweight and hungry, they were not wearing collars with tags to identify them, nor were they microchipped. No one came forward to claim this duo.

Beau and Tye were each placed into a foster home. This was to ensure these young pups were socialised with other pets and people while being exposed to a normal home environment, before becoming available for adoption.

First night in care, Beau vomited up pebbles, rocks and leaf litter! Thankfully he showed no other signs of being ill or distressed and was eating, drinking and toileting normally. Over the following days, Beau quickly put on weight, gaining just over two kilograms in his first week in care.

Tye also thrived in his foster home, quickly gaining confidence and learning how to interact with other dogs and other people. 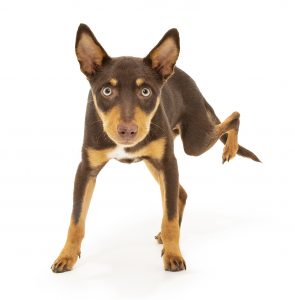 Considerably smaller than his brother, Tye arrived with an injured hind leg, rendering the limb useless. X-rays of the injury were taken and a consult with an orthopaedic specialist organised. It was advised that the damage is likely to have occurred when Tye was very young. Amputation was recommended as being the best course of action for the welfare of Tye.

Undergoing surgery, Tye successfully turn into a tripaw. He returned to his loving foster home so that he could recover in a familiar environment where he felt safe and loved. Ten days later he returned to the shelter for a final health check and to be picked up by his new humans.

We are pleased to report, that we have heard from both Beau and Tye’s new loving families and they are continuing to grow and thrive.

Tye, now known as Tripod, even has his own instagram account @luna.and.tripod which he shares with his new fur sister Luna.