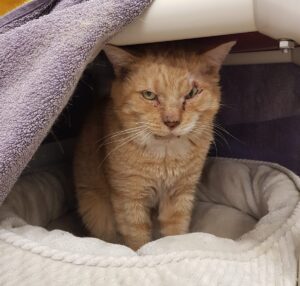 Don’t be fooled by Trifle – he may look mean and scary, but he is the complete opposite! Trifle came into the Home after a life on the streets, a little worse for wear. He tested positive for Feline Immunodeficiency Virus (FIV), a life-long virus that weakens the immune system; was unwell with cat flu; had a large scar on his left eye and had a number of dental concerns. Trifle was in need of a lot of love and affection, which the staff at Sydney Cats & Dogs Home were quick to deliver!

The Animal Care Team determined 6-year-old Trifle would need his canine teeth extracted so he could eat and groom comfortably. After successful treatment for his flu, Trifle went in for dental surgery. The procedure was a success and Trifle is now able to properly enjoy his one true love – food.  After examination of his eye, it appeared Trifle has some previous trauma which lucky hasn’t affected his vision; it just gives him loads of character!

When Trifle first came to the Home, he was fearful of people and other animals such as dogs. Any sudden movements would startle him and he would hide in the comfort of his cat pod. Trifle was placed in a large enclosure in reception where he could get used to people, and his progress was amazing! Over time, he began to approach our staff for pats and soon, he discovered he loves being brushed.  These days, Trifle will come running when he hears a can being opened and will give you one of his strong headbutts! 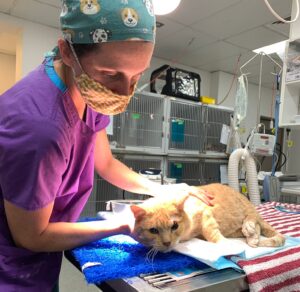 Because Trifle took his time warming up to new people, is FIV+ and has a cool battle scar on his eye, he looks a bit scary, so it was anticipated he may take some time to find the perfect home. But shortly after his dental surgery, Trifle has found his forever home!

It is because of the ongoing support of our community that cats like Trifle are able to receive the care and support they need and the opportunity to find their forever home. If you want to help cats like Trifle receive a second chance, donate today at https://sydneydogsandcatshome.org/donate/.