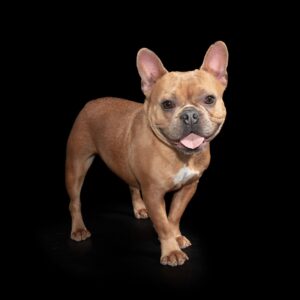 Meanwhile, Pablo the French Bulldog had been surrendered to Sydney Dogs & Cats Home due to no fault of his own. It was a rare occurrence to find an almost 2-year-old French Bulldog available for adoption from a shelter. When Helle saw Pablo on the Sydney Dogs & Cats Home website, she applied immediately, thinking her chances were slim since Pablo had become a very popular little man. She thought he was the perfect fit for her family as he was a similar size to Ayla, and she knew French Bulldogs are known for their placid temperament, which would suit her two young daughters.

Helle was invited for a meet and greet with Pablo at the shelter. Pablo loved Helle and her family. After the meet, they were thrilled to be able to take Pablo home. But it wasn’t quite smooth sailing from there. For the first few days, Ayla didn’t welcome Pablo with open arms, as was hoped. Ayla came to Sydney Dogs & Cats Home as a street dog and had a habit of resource guarding. Dogs sometimes guard their resources in order to convince other dogs and humans to stay away from toys, food or a particular place they’ve deemed as their own. Even humans can be resource guarded. Ayla’s past meant she had to constantly resource guard when she lived on the streets, and though she was thought to have left this behaviour behind, Pablo seemed to be a trigger. 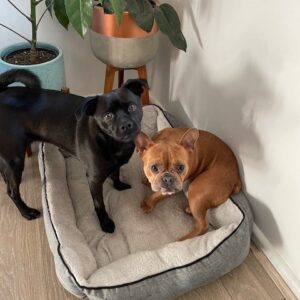 Helle made the important decision to reach back out to Sydney Dogs & Cats Home and ask for assistance and a trainer was recommended. Helle really wanted Pablo to be part of the family, so they engaged a trainer, which helped the family recognise and respond to stressful scenarios for Alya. After five days, both dogs started getting along and playing together. The family even noted that Ayla was the one initiating play by bringing toys to Pablo. Helle told us, “Training has been a godsend. I wish everyone had to be forced through that type of thing; it’s been extremely helpful.”

Helle’s two young daughters have loved having Pablo in the family. He has taught them important lessons about responsibility and boundaries. Pablo gets along with kids extremely well. He is happy and friendly, plays with them constantly and even gets a sneaky bite of dog-safe food from them now and then. Pablo is very easy-going around Helle’s young girls, which she said is a teaching point for her daughters to learn that dogs aren’t toys and deserve respect and boundaries. But it appears Pablo enjoys playing so much he keeps coming back for more. “He’s a glutton for punishment and comes back and gets dressed up,” Helle said.

Helle said that adopting from the Home has allowed her family to give dogs in need a fresh start and a new home. She believes the choice to adopt instils in her daughter’s responsibility and compassion for animals in need. “The girls help me with making sure that they have water, and they help feed them in the morning,” she said. “And I think it’s one of those things that’s really, really good for kids to learn at a young age… It’s brought a lot more activity into our lives. If I wanted a third dog, I’d go back to Sydney Dogs and Cats Home in a heartbeat.”