When Obi (previously Yogi Bear) was brought into the Home in August 2020, it was clear he required immediate vet attention. The young Staffy cross’ collar was deeply imbedded into the flesh of his neck, suggesting his collar had been fitted when he was a young puppy and hadn’t been loosened as he grew. 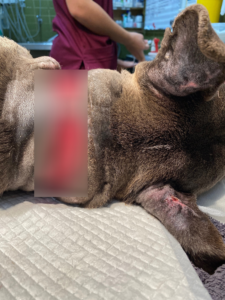 After an exam, our vet team determined Obi needed urgent surgery under anaesthesia to remove his collar. He immediately went into surgery, the collar was cut off and his wounds were cleaned, alleviating what could have been months of pain.

Over the next five weeks, Obi’s wounds were managed with regular cleaning and bandage changes under anaesthesia. Slowly, his wounds began to heal and contract, leaving him with the beautiful battle scars that today give Obi so much character.

As he settled into the Home, Obi began to show us his sweet, confident personality. While he proved very trainable, he also had a few behavioural traits including hyperactivity and mouthing, which often make it difficult for dogs to find a home.

But this wasn’t the case for Obi. After just two months in our care, Obi found a home with James. Building on Obi’s initial training at the Home, James has helped transform him into a well-mannered, much-loved dog who gets to go on lots of adventures. 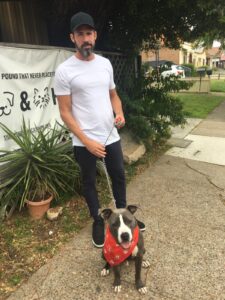 During the early stages of adoption, James was with Obi almost 24 hours a day, 7 days a week. We’re told Obi was house trained in two days, and within the first week, had mastered stop, sit, lie down, shake hands and to stop pulling on his leash. To this day, Obi practices his cues every night. James tells us, “it has not been easy, but worth every minute. We are both better off.”

Since being adopted, Obi has overcome his separation anxiety and been exposed to lots of new people, dogs and places, including bush trails and the beach. He’s also now comfortable with other dogs, noises, people and traffic. As James puts it, “he is an amazing dog!”

As Sydney’s only charity pound, it’s only thanks to the generous support of our community that we can give dogs like Obi – who had such a rough past – the future they deserve. Thank you to all our wonderful donors, and thank you James, for giving Obi a wonderful new home.

If you’d like to help pets like Obi receive the care they desperately deserve, make a donation today.