Colleen was beside herself with joy when she found out her cat Leo had turned up at Sydney Dogs & Cats Home. It had been eight months since her family had seen him, so for Colleen “it didn’t seem real.”

In April, Colleen moved to a new house, transporting Leo in his cat carrier. When she let him out to explore the new place, he jumped into the garden and disappeared. Leo would normally come when he was called, so Colleen wandered around calling for him every time she went outside. About five days later Leo reappeared, hiding under the caravan, but when Colleen tried to retrieve him, he ran away.

Since their old house was just down the road, Colleen visited regularly for six weeks searching for Leo, but he was no where to be found.

Then, eight months down the track, we contacted Colleen’s family with some surprising news. Leo had just arrived with a council ranger, having been picked up around Colleen’s old house. Luckily he was microchipped, making it easy for us to find his family. 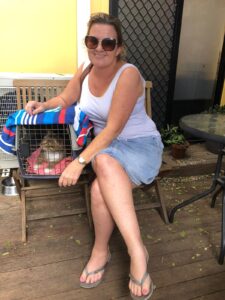 As soon as Colleen heard the news, she jumped onto our website to make sure it was real. “There were a few tears,” she said.

Since Leo has returned home, he’s been readjusting to family life, including having his feline sibling back. The first day he was very timid, but by nightfall, he was already rubbing against Colleen for attention. “We’re very happy to have him home,” Colleen said.

As in Leo’s case, a microchip with contact details kept up-to-date is essential in helping to reunite lost pets with their owner, no matter how long they’ve been apart.  In NSW it is a legal requirement for cats and dogs to be microchipped by 12 weeks of age and to be registered on the NSW Pet Registry.

And remember always update your pet’s microchip details when you change address, phone number or email, or transfer them to a new owner. Microchip details can be changed by contacting the NSW Pet Registry.