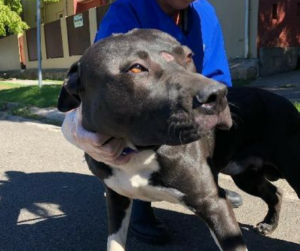 In late March, Gopher was brought into Sydney Dogs and Cats Home as a stray.  The beautiful one-year-old Staffy X was covered in ringworm lesions.  They were on his face, head, legs and even his paws.

Ringworm is a contagious fungal infection that causes hair loss, skin ulceration and itchiness.  Not only can ringworm spread from one dog to another but it can also spread from dog to human.

So poor Gopher had to spend his first weeks at the Home completely quarantined and isolated.  Gopher couldn’t go out on walks because of the risk he would spread the fungal infection to the other dogs living in and around the shelter.  Also the team members who interacted with Gopher had to be covered from head to toe in disposable protective clothing to ensure they didn’t becoming infected or pass on the fungal infection to the other animals in our care.

The team put together a treatment plan for Gopher which addressed not only his ringworm infection but also a way to keep this young boy entertained and happy whilst in isolation.  For the first two weeks Gopher’s lesions were treated twice daily with the application of an anti-fungal cream. Gopher was also given a weekly bath with an anti-fungal shampoo over the quarantine period. To keep Gopher occupied while his skin slowly healed and his coat grew back, the team provided th 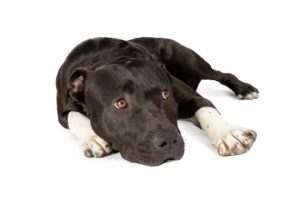 is big boofhead with lots of enrichment games, toys and treats to keep him busy.

Finally, after five weeks, Gopher was given the all clear.  Our volunteer photographer Peter from Tame & Wild Studios captured some amazing images of Gopher which went up on our website.  And in no time at all a wonderful human came forward to adopt Gopher and give him the forever home he deserves.