Crumpet came to us in April, made weary by his time on the streets. The 10-year-old gentleman had no ID and initially appeared to be suffering arthritis, a cyst on the back of his neck and dental disease.

To get to the bottom of his ailments, we did a blood test and x-rays, finding he had moderate dental disease, an area of resorbed bone in the lower jaw and arthritis of the spine, hips and elbows. Otherwise, he was a healthy cat. 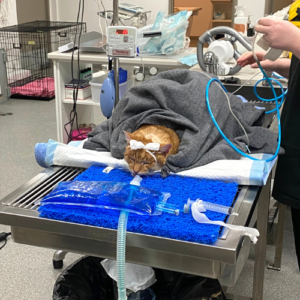 Our vet team were concerned Crumpet’s jaw issue might indicate cancer, so a bone biopsy sample was sent to pathologists. Thankfully, no cancer was found, with his results indicating a bone infection, which was easily treated with antibiotics

Crumpet underwent a major dental procedure, complete with a scale and polish, in addition to cyst removal from his neck.

Crumpet was fortunate to have a wonderful foster carer Alicia, who helped him recover post-surgery, and monitored his arthritis for signs of improvement while on pain relief. Crumpet’s energy improved and his back legs stopped shaking, indicating major improvements in comfort and quality of life. 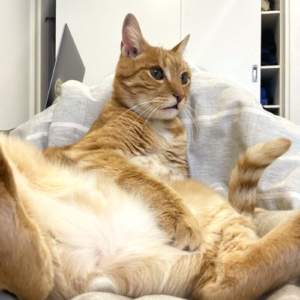 Meanwhile, Alicia was growing quite fond of Crumpet. She’d fostered several pets before and is normally a dog-person, so thought fostering cats would make it easier to let go. Crumpet proved her wrong!

Crumpet became a ‘foster fail’, meaning he was adopted by his foster carer. We’re told he’s doing really well in his forever home and loves cuddling and spending time with his people. What a wonderful way to retire!

Crumpet now has his very own Instagram, where you can follow his forever home adventures. Check it out @crumpelstiltskin_cat.

As Sydney’s only charity pound and community facility, we rely on donations to give senior pets a second chance in life. Donate today to the Senior Pet Project to give pets like Crumpet the care and treatment they need to thrive in their twilight years.

ABOUT THE SENIOR PET PROJECT

In its second year, our Senior Pet Project was started as an initiative not only to put a spotlight on golden oldies to help with their rehoming, but also to raise the funds required for their much needed veterinary care and often prolonged stay at the Home.

With your support we are looking to raise $50,000 to help fund the Senior Pet Project in the months ahead, enabling us to give the seniors entering our care a new leash on life.