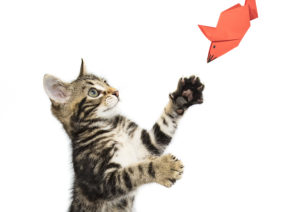 Two 10 week old rescue kittens, Chester and Mia are doing a very important job for Sydney Dogs and Cats Home (SDCH). They are road testing the latest cat toys to hit the charity pound since SDCH’s call out to the community to make origami mice for the felines in their care.

It’s a far cry from where they were a month ago when they were spotted running towards a busy highway in Kogarah, hungry and crying out for mum’s milk.
Since being rescued, the pair has been receiving round the clock care through SDCH’s foster care program and will soon be made available for adoption to find their forever home.

In the meantime, the origami mice are keeping them occupied. “Toys play an important role in a kitten’s development,” says SDCH’s Animal Care Manager, Renae Jackson, “They are a great form of enrichment which keep cats active and maintain their mental and physical health.”

And the reason for the origami? “We need disposable toys for disease control as sadly there is an extremely contagious and deadly virus, known as Feline Panleukopenia Virus (FPV) out there which is affecting cats across the country,” says Ms Jackson, “so we’ve needed to take strong measures to ensure our residents are safe.”

Sydney Dogs and Cats Home sees 3000 lost and abandoned animals enter its doors each year. Relying on the generosity of donors, the Home works to provide the best possible care for the animals during their stay before reuniting them with their owners, or rehoming them to loving families.

They never place a time limit on any animal awaiting adoption, and at this time of year, the small 71 year old shelter can get very busy. The summer months, known as “kitten season” see an increase in the number of cats coming in to the SDCH, which is why this simple, yet effective call out for origami mice is so vital.

After a solid session of play, the paper toys have received a purr of approval from Chester and Mia. “The more origami mice being sent in to the Home, the merrier the cats,” says Ms Jackson, “It’s also a great option for reusing all that Christmas wrapping!”

Want to get creative to help the cats of SDCH? Join the LoveCats Gang today.