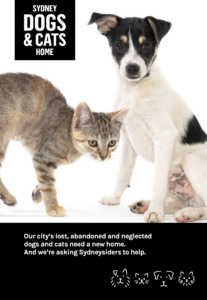 Everybody needs a home – a place where you can be yourself, feel safe and be loved.

Sadly, thousands of dogs and cats in Sydney have no home. No place to call their own. That’s where Sydney Dogs & Cats Home helps.

For over 75 years we’ve been home to thousands of abandoned and neglected dogs and cats while helping them find new homes. And we’ve reunited thousands more lost pets with their owners.

But now it’s Sydney Dogs & Cats Home who needs help. We have to leave our old home. A new home will help us meet the needs of Sydney’s growing number of abandoned and neglected dogs and cats.

The site of Sydney Dogs & Cats Home at Carlton was until recently, leased. Now a private developer has received DA approval to redevelop the site and we must move. However, it is the right time to move. The current site was never purpose-built, too small for the thousands of animals we receive each year and had become increasingly difficult to deliver our wide range of animal welfare and community outreach services.

We’ve found the place and we’re asking Sydneysiders to help make it happen.

It will take a whole community to help us build our vision. If you would like to discuss contributing to our capital campaign and are from a corporate or private funding body please contact our Fundraising Team, fundraising@sydneydogsandcatshome.org

Each year thousands of animals, mostly dogs and cats who have been lost, abandoned or neglected are brought to Sydney Dogs & Cats Home for help.

Evidence clearly shows that every year in Sydney, thousands of dogs and cats are left on their own to face our city’s streets. By the time these poor animals reach us, they need lots of veterinary care, a safe environment and of course, kindness. At Sydney Dogs & Cats Home, we provide all of this and so much more.

We also know how happy pets often make happy people. Sydney Dogs & Cats Home support vulnerable pets and people – through our delivery of successful mental health-focused community programs. It’s common to see one of our dogs at a school, aged care home or with defence personnel helping create a lifeline between them and people who benefit from animal companionship and interaction.

For over 75 years we have been Sydney’s pound; helping and rehoming thousands of animals. Despite many improvements in veterinary science and increased awareness of animal welfare and pet ownership, urgent help for Sydney’s pound is needed.

Sydney Dogs & Cats Home has a plan to invest in our animal welfare team, veterinary services and community outreach programs. We also must move. Our current site at Carlton which was leased, cramped and largely unaltered for decades has been sold. Critically, the site has been approved for redevelopment by the owner. Plans for our move to a new $15 million home at Kurnell, with land already secured under a 50-year lease from the NSW Government, are well advanced.

Now we are asking Sydneysiders to help the city’s oldest, biggest and only charity pound move to a new home.

When the time comes, we will be laying a path that will show the journey we have taken to build our future.

We will recognise your support by dedicating pavers to you and your four-legged friend!